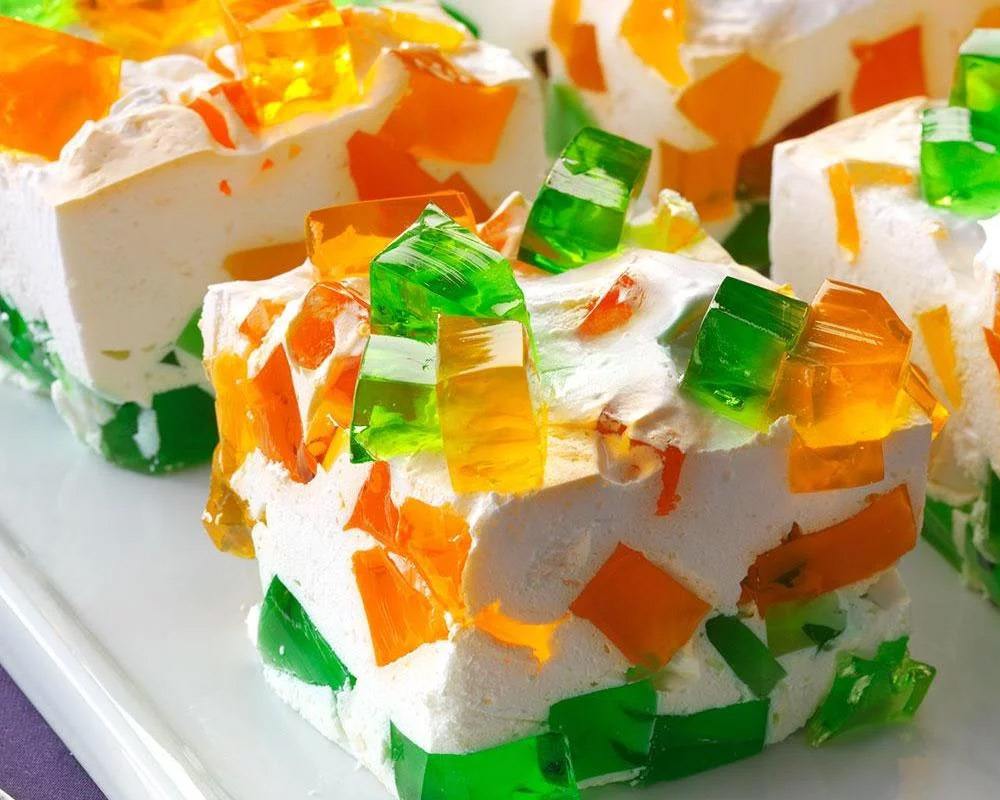 The high protein found in gelatin amino acids makes it an ideal choice for recovery patients. Some people take gelatin supplements. Collagen and gelatin both contain the same proteins and several lab tests suggest that including gelatin in your diet may supply some benefits. Gelatin is produced by processing animal skin, cartilage, and bones. It can also be made from fish. In this manufacturing process, collagen is extracted from the fibrous protein which connects skins, bones, and muscles in animals transforming it into a colorless, flavorless, jelly-like substance called gelatin.

You can get 0.82 grams of protein from 240g of gelatin dessert. Adults are recommended to eat 46-56g of protein daily or 10-35% of the recommended daily intake daily depending on the sex and age. Your body needs the macronutrient, protein, meaning your body needs it in significant amounts to function.

Protein maintains and builds body tissues. It also helps various organs to function properly and gives them energy. There are several amino acids in a protein, some of which are already made in the body while the others have to be gotten from the diet.

An example of a protein source is meat but it has high unhealthful fat. However, the protein in gelatin has no fat. A study in 2017 suggested that gelatin mixed with vitamin C in a supplement may help repair or prevent athletes’ body tissues.

Collagen keeps your skin healthy and gives the person a youthful appearance. The older you get the more collagen you lose. This causes the skin to lose its firmness, develop fine lines and wrinkles.

Gelatin may naturally improve collagen and enhance the appearance of the skin. A study in 2016 discovered that using collagen reduces wrinkles and increased facial moisture in humans. Experts are however unsure if consuming gelatin has the same effect.

Gelatin has glutamic acid, this substance promotes the stomach mucosal lining and may also assist digestion. It is also suggested that glutamic acid stimulates gastric juice production which helps digestion. Water binds to gelatin aiding the movement of food through one’s digestive system.

Eases pain in the joint

The collagen found in gelatin tends to reduce inflammation associated with joint pain. According to a few clinical studies, gelatin may enhance joint function and reduce pain in osteoarthritis patients. However, there is a need for more research on this.

A study showed that gelatin contains the amino acids called glycine which may potentially help manage type two diabetes. Those who were treated with glycine had a reduction of inflammation and A1C levels. This suggests that glycine can help in preventing complications like tissue damage.

Some gelatin derived products like gummy candies which have a high sugar content are not suitable for type two diabetic patients.

Lysine can also be found in gelatin and it helps in strengthening bones. Lysine also makes it easier for the body to absorb calcium and keeps your bones strong preventing bone loss. Some use gelatin to reduce osteoporosis risk causing the bone to get brittle or weak.

Gelatin amino acid, glycine is said to increase sleep quality for some. A published study in 2016 had people take 3 grams of glycine before bedtime and they reported better sleep and a more clear-headed and lively feeling when they woke up.

In 2007, more detailed research confirmed these and suggested glycine could be used to enhance sleep. However, note that gelatin is not recommended by these studies for improving sleep.

There are suggestions from some scientists to promote loss of weight because of its elevated level of protein and decreased calorie content. This is possible because protein gives people a feeling of fullness with them not having to overeat too much.

Take note that some gelatin sources like marshmallows and chewy candies have increased the sugar content. It is better to go for the low sugar gelatin sources which are more healthy.

Some say gelatin capsules helps to increase hair growth. Scientists in 20014 observed that the hair shaft increased significantly in length after a derivative of gelatin was given to mice for ten days. This is not a guarantee that the same result will be seen in the hair growth of humans.

What Are The Risks?

Certainly, not all food that has gelatin on its ingredient list is good for your health. Before purchasing any food you are advised to check for its sugar content and fat, especially if you have specific health conditions.

There are concerns raised about gelatin in food increasing one’s risk for animal-borne diseases like encephalopathy bovine spongiform. However, the FDA permits gelatin gotten from cows and is processed within the safety guidelines.

There is little information concerning the effects of eating gelatin but according to the national health institute, it is probably safe to consume gelatin orally. They also add that taking 10gms of its supplements for six months is within safe limits.

Since gelatin is derived from animals, vegetarians and vegans may not be able to include it in their diet. The seaweed-derived product, agar-agar serves as an alternative in terms of delivering the same texture as gelatin to food. However, it does not have a similar protein level as gelatin.

Gelatin amino acids, when included in your meal preparation, will improve the texture, nutritional value, and flavor of the food. There may be other ways by which gelatin benefits your health-wise but more research has to be done in this area before these health benefits are confirmed.