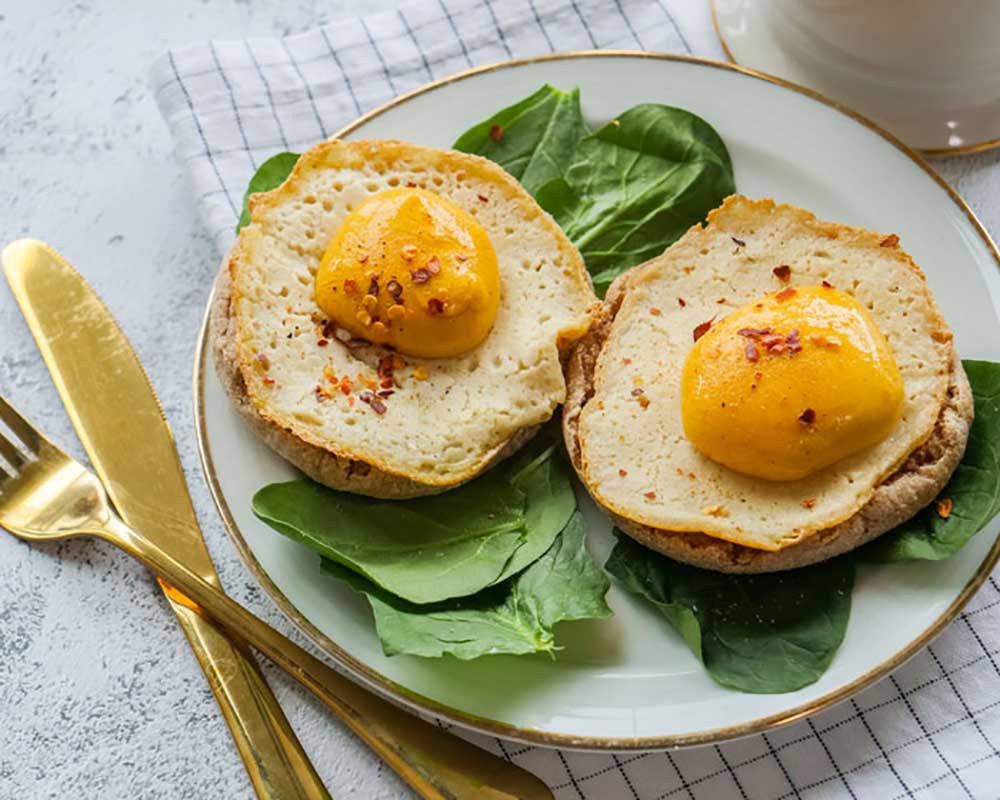 Plant-based proteins have become exceedingly popular across the globe with meatless burgers and other plant-based meat alternatives. For example, the Impossible Whopper was released by Burger King nationwide, while Del Taco has released Beyond Tacos, a minced veggie-friendly version of its tacos. Dunkin Donuts also released a breakfast sausage sandwich that is plant-based. As such, it is no longer surprising that other plant-based proteins have started showing up and eggs are no exception. This where the Vegan Egg (specifically Just Egg) comes in. It is a vegan egg food product that comes in a bottle and is about to turn breakfast upside down. But what is a vegan egg made out of?

Vegan eggs are made up of plant-based proteins and the main ingredient is mung beans. However vegan eggs also contain onions which include turmeric and carrots, with the turmeric able to give it an egg-like yellow glow. Since this vegan egg does not come from chicken and it comes with ingredients that may be hard to pronounce such as nisin, transglutaminase, and tetrasodium pyrophosphate. Its primary ingredient, as stated earlier, is mung bean and is commonly utilized in making desserts and found in many parts of Asia. This same bean provides vegan eggs with that texture that is characteristically egg-like.

Similar to eggs, vegan eggs can provide adequate amounts of protein which is five grams for each serving. The good news though- it does not have any cholesterol. Vegan eggs are not just for those observing a vegan diet but they can also be taken by lovers of eggs who also like to reduce their levels of cholesterol. The eggy texture has also been added in there for individuals who want to reduce their impact on the environment.

Considering the damning effects of farming and agriculture that is industrialized, there is a need to identify other solutions that are much more sustainable to continue feeding a population that is still growing healthily and safely. Researchers worked hard to come up with this vegan egg formula and this is where mung beans were identified as the main ingredient for vegan eggs.

How is Vegan Egg Cooked and How Does It Taste?

Most people may find pouring “egg” from a bottle can be a bit offputting. This is understandable as most people are used to cracking open an egg before cooking it for breakfast. However, once it starts cooking, the smell of this vegan egg can be quite enticing. The concoction of this vegan egg can be likened to have a smell that is MSG- Like, sort of like the smell experienced in steaming instant ramen in a bowl (in a good way).

When first cook or prepared, it may look like a crepe or a pancake but after some time, the faux egg started to look like an egg that is being cooked. Salt and pepper can then be added similar to when regular eggs are being cooked before scrambling. One of the major concerns when preparing this vegan egg though is knowing when they are done and ready for consumption. Most vegan egg products will recommend that the egg be cooked well which may turn off people who may want their scrambled eggs to be a bit soft.

The texture of vegan eggs can also be a little tricky. While the mung bean flavor can come off as a genuine egg, the texture can be stringy or gritty. It can be compared to cooking eggs with some cheese added in which can result in a mouthfeel that is quite unpleasant. This is not like the normal plate of scrambled eggs that can taste fluffy. You can make vegan eggs taste much better by adding chili crisps and making vegan eggs better in French toast batter, fried rice, and some sandwiches. If combined with other flavors, vegan eggs can actually taste good.

How Can People Try this Out?

If you want to enjoy vegan eggs and experience their benefits, you need to be prepared to shell out a bit more as a bottle can cost more than regular eggs. This vegan egg is also available in most groceries across the nation and you can already start coming up with your plant-based egg dishes. If you are one of those who are not into cooking, then vegan eggs can be obtained through different restaurants that do offer this kind of food items such as Tim Hortons, Veggie Grill, and Bareburger.

In addition, you can also enjoy vegan egg brands available online or in stores. Some well-known brands include:

Are Vegan Eggs Good for the Health and For The Planet?

While some people may point out that vegan egg texture still needs a bit of improvement, vegan eggs are a good start in shifting to plant-based eggs. The flavor is acceptable and it also has a tolerable texture if other ingredients are mixed in and combined.

Vegan eggs are not yet recommended to be used for baking but some companies are already trying to fix this specific issue. It is interesting to find out how other companies can release vegan egg items that are designed not just for those who love scrambled eggs. On top of all these, it is also important to point out that reducing our dependence on animals for our food items is always good for the environment and mother nature. This can help improve how sustainable our food sources can be and also help in making our food systems much more streamlined and efficient. Experts recognize now that food systems require new much more environment-friendly tools and options to help enhance who people consume food items. The answer to this goal may just be found in the world of plants.

Lastly, vegan eggs are healthier compared to regular eggs. It can provide the same amount of protein, similar flavor, and texture, with the reduced cholesterol content. This is perfect for people who want to reduce their cholesterol levels.