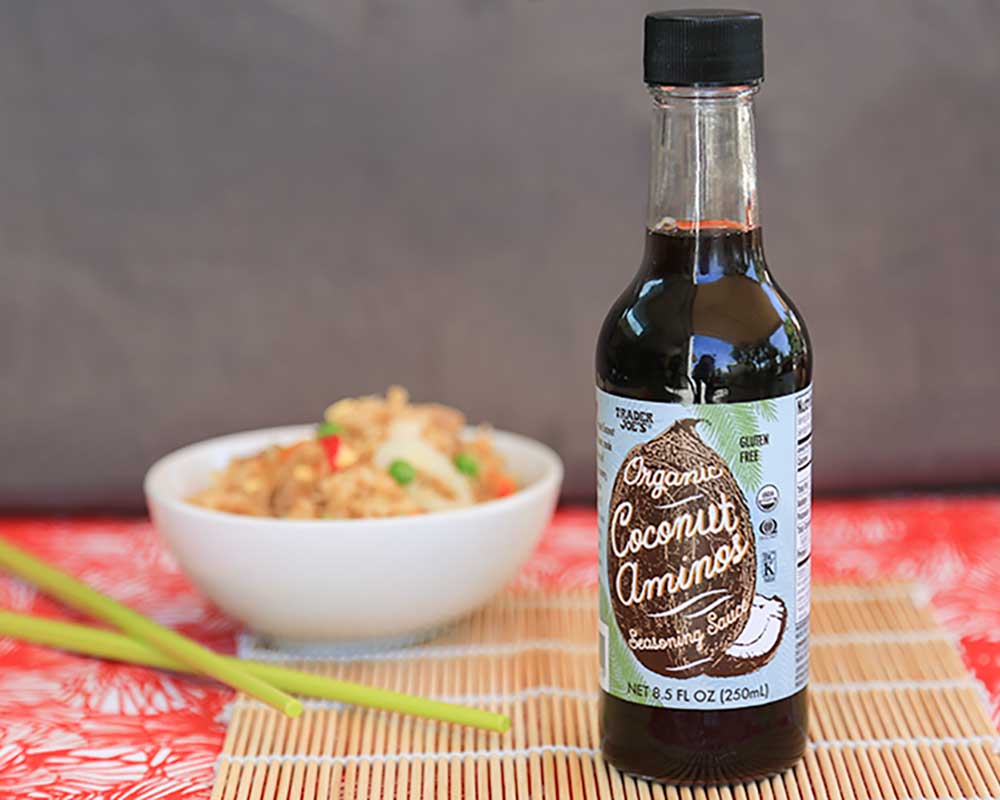 Coconut aminos are suggested to be the perfect alternative to popular soy sauce, especially in Japanese and Chinese cuisine. People who seek to reduce their salt intake, eliminate soy, or avoid gluten are on a constant lookout for these coconut aminos. As a result of this demand, a lot of manufacturers have ventured into this business and there are varieties of coconut aminos in today’s market. Of course, no two brands of these can be the same, even if they have similar ingredients there is bound to be a difference. Trader joe’s coconut aminos is one brand that we would like to examine today.

Trader Joe is a leading retailer with shops across the city making them easily accessible. Their coconut amino is only one of their numerous products and we want to find out how nutritious they are. You might be wondering what’s the need of checking out its nutritious fact. Well, gone are the days when people just throw in products from the aisle in their cart. We now live in an increasingly health-conscious society where almost every foodstuff passes through the scrutinizing eyes of those who are knee on staying on the healthy side.

Generally, coconut aminos are savory, salty seasoning sauce got from sea salt and coconut palm fermented sap. Diverse food products are produced using sugary liquid. Coconut aminos have a similar consistency and color with soy sauce hence why can easily serve as substitutes for many recipes.

It might not have the richness of traditionally made soy sauce but you will be surprised to find out that it does not have a coconut taste. Its flavor is also sweeter and milder.

However, coconut aminos cannot be considered as a significant nutrient source, though people with some dietary restrictions will find it a good substitute. For example, those who are allergic or sensitive to some food like wheat and gluten cannot use soy sauce because it contains them but they can use coconut aminos instead.

Another reason why people tend to avoid using soy sauce is that it has a high amount of salt (sodium) content. In comparing both food ingredients, coconut aminos contain 90 mg sodium for each teaspoon (5 ml) while the traditionally made soy sauce has about 280 mg per teaspoon or 5 ml.

This makes coconut aminos a healthier option for those trying to limit their sodium intake. However, it is not to be considered as a food with low sodium thus should be used with caution. This is because the salt will be quickly added up if more than 5-10ml is eaten at once.

There have been reports from some well-known media outlets claiming that consuming coconut aminos can be very beneficial to health. These benefits include lowering heart disease risk, supporting weight loss, and regulating blood sugar. However, there is lacking research concerning these claims.

The basis of most of these claims is that coconut palm and raw coconut contain different nutrients known to positively impact health. Examples of these nutrients are zinc, potassium, some antioxidants, polyphenolic compounds, and magnesium.

Noteworthy is the fact that coconut aminos are a form of coconut palm fermented sap, and its nutritional profile may be different from the unfermented version.

In reality, there is nonexistent scientific research concerning the possible impact coconut aminos can have on health. Even if all these nutrients are found in coconut aminos, the quantity that will be needed to get any significant health benefits will not be worth it. You should get these benefits from whole fresh foods.

There are arguments that coconut amino’s flavor is too muted and sweet in comparison to its soy sauce counterparts, thus making it unfit to be used in specific recipes. This argument is based on individual preference.

Setting aside its sustainability, when viewed from a culinary outlook, we find that coconut aminos have a few downsides in the aspect of accessibility and cost. You cannot find coconut aminos in each country, although you can order it online with shipping costs. If it is available in your locality, you will find that it costs more than soy sauce.

Through the fermentation of coconut palm, you get coconut aminos. This liquid ingredient contains no gluten, wheat, and soy. It also has less sodium content making it a better option than its counterpart soy sauce. Though coconut health benefits are often been associated with it there is no research to confirm this.

Coconut aminos are not to be listed under health food as it does not have a significant rich nutrient profile. You should also remember that this condiment has some measure of salt and so its portion needs to be monitored for people watching their sodium intake.

Also, it cost way more than the traditionally made soy sauce causing people to ignore it on the aisle racks.

In general, you can use coconut aminos as a replacement for your soy sauce. There are differing opinions as regards the taste but again that is based on personal preference, and who knows, you might like it. But you will have to first purchase it before you can tell where you stand.

Don’t forget to look out for trader joe’s coconut aminos when you want to get a bottle of it. It’s one of the trusted brands out there, and they have online services just in case you are out of reach.